Thanksgiving Is a year-round practice of giving thanks

The narrow, rectangular lot pressed between 25 and 31 Bridge Street in Lower Manhattan sits empty save for a few precious parking spaces and a row of dumpsters. A nail salon advertises services on one side, while the White Horse restaurant has bracketed the other since 1641. Across the street, on the ground floor of a steel-and-glass skyscraper, a more modern eatery offers office workers, here in the heart of New York’s Financial District, business lunches to go.
Link to Story

The Quest for Blue

It’s easy to think of blue as a naturally pervasive color. It’s all around us in clear skies and bodies of water. Yet elsewhere blue appears infrequently, coloring only a handful of minerals and less than 10 percent of flowering plants. Even the feathers of birds, from blue jays to bluebirds, are not truly blue but the result of a biologically sophisticated trick of the eye.
AramcoWorld Link to Story

The Dialogues of Don Quixote

Four centuries later, I wandered the labyrinthine streets of Toledo’s old quarter and ended up, like most pedestrians, in the Alcaná, a name that comes from the Arabic al-janat, meaning “the (market) stands.”. It is still a bustling center of commerce, and a plaque, inconspicuously tucked beneath a second story window, commemorates the spot’s connection to Don Quixote.
AramcoWorld Link to Story

As Plastic Fills the Ocean, Artist Finds Source of Inspiration

The Prized Pepper That Comes From a Single New Mexican Town

On March 24, 1005, a man reputed for madness came to his senses long enough to establish one of the most progressive and influential academic institutions of the Middle Ages. “On this Saturday ... the so-called House of Knowledge in Cairo was inaugurated,” wrote the chronicler al-Musabbihi, a friend of the new institution’s founder, Caliph al-Hakim, who had assumed his title nine years before.
AramcoWorld Link to Story

The Long Journey of the Aleppo Pepper

Early in the seven-year-old Syrian civil war, American imports of Syria’s signature dried, ground Aleppo chiles dropped drastically. The spice-trading city of the same name, where the fresh pepper was traditionally grown and processed, has been devastated in the fighting, which has destroyed lives and livelihoods.
The New York Times Link to Story

Weighing 3.6 metric tons and measuring nearly three meters from chest to crown, the 3,200-year-old red-granite bust of Pharaoh Ramses ii fairly lords over the British Museum’s Egyptian sculpture gallery. Napoleon’s troops had tried, yet failed to so much as to budge the toppled, fragmented figure from its sandy resting spot in the Ramesseum, the pharaoh’s vast mortuary temple in Thebes, on the west bank of the Nile near present-day Luxor.
AramcoWorld Link to Story 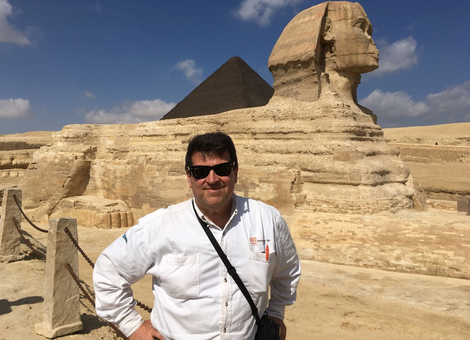